ADA: Equal Opportunities for Everyone 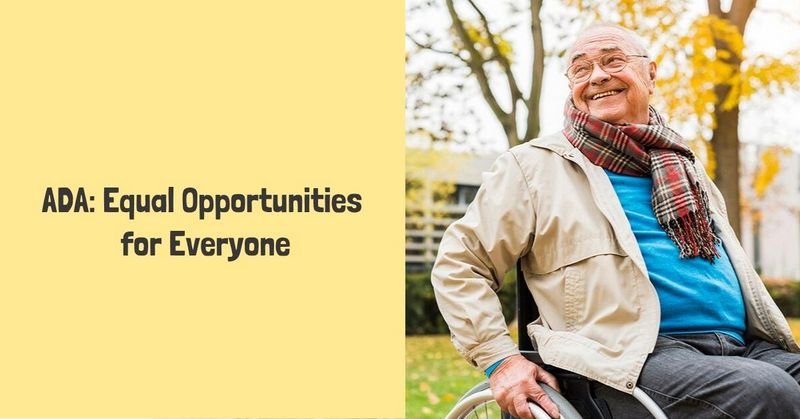 The Americans with Disabilities Act (ADA) protects 56.3 million people from discrimination in all areas of life, including work, school, and transportation.

The law, which entered into force on July 26, 1990, guarantees Americans with disabilities free access to public buildings, equal employment opportunities and equal access to public services.

No one left behind

Thanks to ADA, more and more people with disabilities are pursuing careers by working alongside non-disabled colleagues in offices and businesses across the country.

At a White House ceremony on July 25, President Obama praised the law, which provided Americans with disabilities with the guarantee that they could be full members of their communities and their people.

“Thanks to ADA, the places that are part of our common American life — schools, offices, cinemas, courthouses, buses, baseball stadiums, national parks — really belong to everyone,” Obama said. “Millions of Americans with disabilities have a chance to develop their talents and make their unique contribution to the world. Thanks to them, America is becoming stronger and brighter; the country got better with ADA. All of the above factors are the achievements of the law.”

One of the strongest advocates of ADA-compliant access is Secretary of State John Kerry, who speaks about the benefits of ADA not only for working people with disabilities but also for the communities in which they live.

By making the United States more accessible to all citizens, the ADA “has raised the expectations of people with disabilities about what they can hope to achieve in work and in life,” says Kerry. The law inspires the world to “address disability through the prism of equality and opportunity.”

An inclusive society, he adds, is a stronger society because it relies on everyone’s talents and contributions.

Also, “The way we relate to people from all walks of life demonstrates our values ​​and determines who we are,” says Kerry. ADA gives a signal of “our determination to ensure that we will not leave anyone behind – absolutely nowhere.”

In the 25 years since ADA became law, U.S. construction standards have changed and now require new public buildings to be accessible to all, and old buildings to be modernized with ramps and other design features to provide access.

From hiring to providing physical conditions for employees with disabilities, American jobs have changed thanks to ADA. And many firms and corporations are working to recruit more people with disabilities.

“The ADA has paved the way for many programs that operate in the United States,” said Keenan Aiden, vice president of the MVLE employment agency, which specializes in finding jobs for people with disabilities.

Modern technology plays an increasingly important role in this process every hour.

ADA has been improved, expanded, and supplemented over the years, and one such improvement was a law passed in 2010 requiring Internet-based communication technologies to be accessible to people with disabilities.

The i-Limb device is a prosthetic hand with independently moving parts, able to bend like a real hand.

Technologies, such as software that turns text into speech, have helped some people earn a law degree and help them with their work at the Department of State. Disabled access is built into iPhone smartphones: VoiceOver and Speak Screen features help people with visual impairments, as does Siri, an “intelligent assistant” who speaks instructions aloud and responds to voice commands. The vibrating alert helps people with hearing loss. The multi-touch screen adapts to specific physical needs.

Additional features are provided by applications. BeMyEyesNetwork (“Be my eyes”) combines modern technology with volunteering. It allows a blind person to call a volunteer to help, say, read the expiration date of a packet of milk. A blind person simply scans text using an iPhone, and a sighted volunteer reads it. BlindSquare is a GPS application that provides voice guidance when walking around public places.

And high technology is also transforming prosthetics in other areas. Robotic arms and wheelchairs capable of climbing stairs can make life easier for thousands of people.

Judith Heumann, an International disability rights activist, said that people with disabilities should be treated like normal people. “As we ride trains and buses more, eat at restaurants, visit educational institutions, and work at the same facilities as ordinary citizens, people are starting to come into contact with us more and more.” This joint refraction of bread helps to normalize the interaction between disabled and non-disabled people. “Things have changed dramatically,” says Heumann, “but much more needs to be done.”

ADA has led people around the world to perceive disability through the prism of equality and equal opportunity. Soon after the adoption of the law, the governments of many countries began to create and implement their own legislation guaranteeing the rights of citizens with disabilities and equal access to them.

The law also influenced the activities of international organizations, such as the Organization of the American States and the European Union, in the fight against discrimination against persons with disabilities. The definition of disability according to the ADA and the legislative consolidation of the rights of persons with disabilities to education, employment, healthcare, access to transport and public places are the basis of the world’s first international treaty in this area – the Convention on the Rights of Persons with Disabilities. Although the United States has not yet ratified the Convention, President Obama and Secretary of State Kerry fully support its ratification.

Right now, the disability community is taking action on H.R. 620, the ADA Education and Reform Act of 2017. If this law passes, people with disabilities would be required to file a written complaint with a violator, who would have 60 days to acknowledge and another 120 to take action before the disabled person could file a suit. Therefore, before going to court, disabled people will have to make accommodation requests repeatedly before filing suit. Disability rights activists claim that H.R. 620 undermines the civil rights of disabled Americans.

For questions regarding ADA, you can visit the website http://www.ada.gov/.