Edward Verne Roberts (January 23, 1939 – March 14, 1995) was an American activist and the first student with severe disabilities to study at the University of California, Berkeley. He was the pioneering leader of the Independent Living movement. 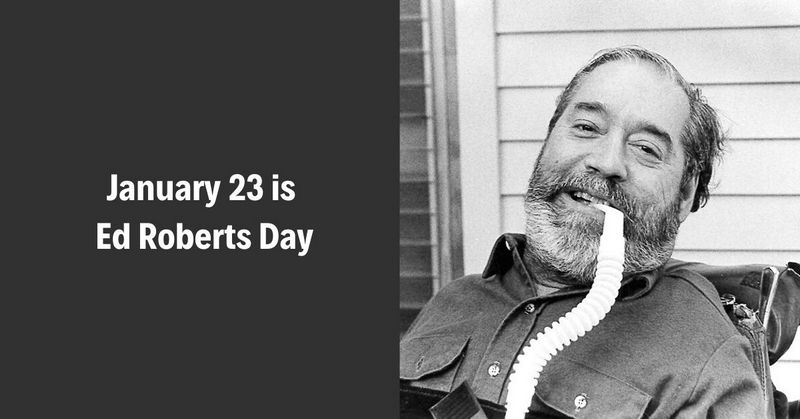 Roberts fell ill with polio at the age of fourteen in 1953. He spent 18 months in hospitals and returned home paralyzed from the neck down. He slept in an artificial respiration apparatus at night and often rested there during the day. He practiced a “frog breath”, a technique for swallowing air using facial and neck muscles.

He was on distant learning for some time but his mother decided that it was better for Ed to attend a regular school once a week. At school, he was afraid of being stared but managed to transform his fear to the sense of personal identity. He stopped being “helpless cripple” and decided to fight for what he needed.

Ed’s career as an advocate began at a high school when he had difficulty getting his diploma because he had not completed ED and driver education. He had to fight for support. He had to go to school from the California Department of Vocational Recovery because his recovery lawyer thought he was too disabled to ever get a job. When learning that Ed had a serious disability, one of the deans of UCA Berkeley insisted that they should accept him and do more for disabled individuals in general.

Roberts graduated in 1962, two years before the Independent Living Movement transformed Berkeley into a hotbed of student protest. His admission inspired other disabled students to fight for their rights.

The group developed self-awareness and began to formulate a political analysis of disability. Their success on campus inspired the group to start defending for their rights and creating of the Physically Disabled Student’s Program (PDSP). It was the first student-led disability service program in the USA. Ed Roberts even flew to Washington, DC to attend the conference related to the federal TRIO program. He managed to get secured funding.
He earned B.A. and M.A. degrees from UCA Berkeley in Political Science. He became the official Ph.D. candidate in political science in 1969.

The need to serve the wider community-led activists to open the Berkeley Center for Independent Living, the first protection program for people with disabilities. This program has provided a model for a new kind of community-based organization designed to focus on the needs of disabled people.

In 1976, Ed became director of the California Department of Professional Recovery, the same agency that once labeled him too disabled to work. He served at that post until 1983. Later he became a co-founder of the World Institute for Disability.

In 2011, Roberts was inducted into the California Hall of Fame.