Assistive Technologies for People with Disabilities

Innovation has long reached a helping hand for people with disabilities: impaired speech, vision or movement.

This article discusses assistive technologies for people with disabilities, which, for example, help people who are hearing impaired participate in group conversations. These useful apps and advanced gadgets make everyday life easier. 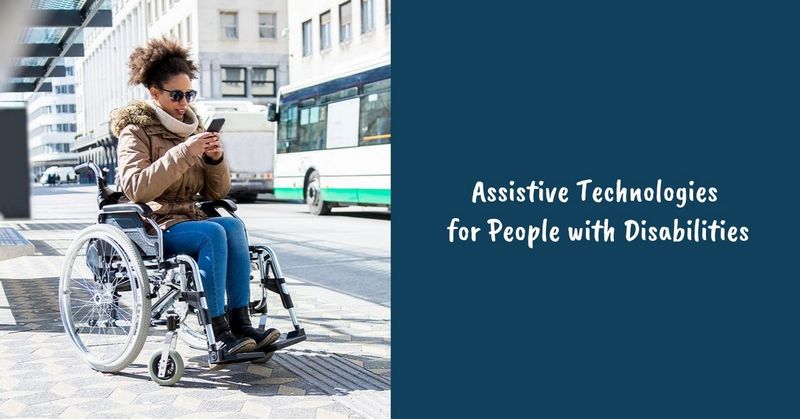 This is a Braille smartwatch for the visually impaired, which synchronizes with the phone. The gadget was developed by the South Korean brand Dot Incorporation and went on sale in 2017. It provides tactile information, allows you to set a timer or stopwatch and always be in touch with loved ones. Each text message that arrives on a smartphone is instantly translated into Braille and sent to Dot Watch. When a person receives a call, the watch vibrates and displays the name of the caller. The working hours of the watch are simple: the relief-point active cells on the aluminum case are advanced by a motor that powers a lithium battery (the charge lasts for seven days). Demonstration speed of words or numbers is from 1 to 1,000 iterations per second.

An innovative mobile application (known back in 2016) was developed by the Israeli company Voiceitt. It is intended for people with speech and language disorders for communication purposes. The program translates an incomprehensible pronunciation into colloquial correct speech so that you can understand the thoughts and words of the interlocutor.

It is noteworthy that the program works in any language: the machine learning algorithm first analyzes the user’s speech (after asking for a few standard phrases), creates a personal dictionary for the person, and then begins to recognize words that it displays in an audio track or text (similar to Siri). Unfortunately, Talkitt is currently in beta testing.

This is a mobile application that allows you to switch to full control of the smartphone with voice and gestures. Reading minimal movements with limbs or the head through the front camera, it recognizes the face and words of its owner, helping to move the cursor, open and use programs.

This development was invented in Israel six years ago. Oded Ben Dov (game developer) and Gior Livni (paralyzed electrical engineer) are the creators of this technology for the disabled. They worked on complex software, using Google’s Nexus 5 as a hardware platform. The original idea and principle of action were taken from the gaming industry, where gesture analysis is very popular when playing games on consoles. The gadget runs on Android and captures activity at a distance of 40-60 cm.

A unique gesture translator facilitates communication for people with hearing and speech problems. The device uses a large database for quick translation of hand language into audio format. Also, the technology allows you to perceive replicas from the interlocutor, converting them into text on the screen. The developers of the project are the Rochester Institute of Technology Design and Programming, as well as the MotionSavvy brand from California.

Today, Uni is not just a program, but also a special tablet with a case. Sensors pick up what a person is showing with their hands at the moment, and then process it into a voice message. For extended use of the device, you can download foreign dictionaries to communicate abroad. Unfortunately, the project is not yet completely ready. Work on it continues, as the program must learn to read and recognize various slangs, dialects and accents.

This is a convenient tool for reading text from scientists from the Massachusetts Institute of Technology. The device was created for two purposes: on the one hand, to help visually impaired people perceive text information in paper or electronic books, and on the other, to translate the language.

An unusual gadget connects to computers and smartphones and is worn on the finger, and it was made on a 3D printer. You need to drag your finger across the body of the text, line by line, and then a miniature camera will scan the data and instantly voice everything that it detects. Using vibrations, Finger Reader can notify visually impaired readers that they are at the beginning of a line or should move to the next line.

A non-profit application with the literal name “Be My Eyes” is aimed at people with visual problems and is designed to rid them of everyday troubles through live video. The program works on the principle of online communication: you need to indicate whether you are a volunteer or are in search of an assistant, and then register.

Requests from visually impaired people come in different ways: from detecting road signs to tips on choosing goods on the shelves. Volunteers receive video calls from users from different countries and act in accordance with the request of the interlocutor. The Be My Eyes project has registered several tens of thousands of people. The program runs on different platforms and was made by the Danish software development studio – Robocat. Hans Jorgen Wiberg, the creator of this technology for the visually impaired, is himself a person with similar difficulties.

BlindBot is a modern device on an elementary basis, featuring a low price. The main advantage of the BlindBot printer is its accessibility for people with visual impairments: it cost only $300, while similar Braille printers can cost $2000 or more. This printer can work with paper of any thickness: from thin printer to very thick.

The Talking City information system is designed to ensure access to urban and transport infrastructure for the blind and visually impaired, people traveling in a wheelchair, using crutches, the elderly and other people with limited mobility. The device, which is located at the user, looks like a mobile phone. “Talking city” helps to find any object in the city, determine the location of public transport, orient the user in the environment, for example, warn about approaching a pedestrian crossing, traffic signals, “lead” to the desired office in the clinic, etc.

To replace hearing aids, a group of four students (from Berkeley and San Francisco) developed a unique mobile application. The program allows you to establish communication, converting speech into text information on the screen.

The AVA invention is sensitive to real-time human speech. It is able to isolate the replica of all participants in a group conversation and indicate their phrases on the display in different colors (like in the classic chats of modern instant messengers). Thus, identification of interlocutors should not be difficult.

Each of the creators of the program has hearing problems, but the nature of the disease is different for everyone. Therefore, young scientists managed to create a truly universal application.

The uniqueness of this electric wheelchair is that it is equipped with two platforms at the same time – wheeled and tracked. A wheeled platform is used for driving on a flat surface, for crawling on cross-country terrain, overcoming curbs, steps and other obstacles. On the one hand, this design allows to ensure high traffic, on the other hand, makes the movement smooth and comfortable, and also reduces energy consumption. At the same time, the dimensions of this stroller are the same as that of a conventional electric stroller. The Caterwill transforming stroller is an excellent option for residents of settlements where an environment for people with disabilities requires much to be desired.

This device is intended for the rehabilitation of people who have suffered injuries and diseases of the musculoskeletal system. The “tee” simulates the reciprocating movements characteristic of natural walking. The Tee device stabilizes the patient in a standing position, stimulates the muscles of the thigh and lower leg, normalizes the act of walking, and also reduces energy consumption when moving. Thus, the Tee orthopedic apparatus performs several tasks at once: it helps a person to move correctly in space, returns lost walking skills, stimulates various muscle groups involved in the act of walking.

The street terminal “Info +” provides access to various information that a person with disabilities may need when moving around the city, including and some public services. This hardware and software complex can become an indispensable assistant for wheelchair users, people with visual impairments, and hearing impairments. The device is equipped with a dual-display sensor module, an induction system, as well as a system for scaling and changing the text contrast, IP-telephony module. There are panic buttons on the terminal that allow you to contact emergency services, as well as two wide-angle cameras paired with the Safe City system.

The ElBraille portable computer organizer is designed to help blind and visually impaired people get an education, use social networks, use various computer programs and services that are not adapted for these categories of users. The design of the ElBraille includes an eight-point Braille keyboard and 14 updatable cells that allow you to display information using a point-and-drop font, as well as a speech tracking system. Along with special software, the ElBraille computer organizer allows you to use the standard functionality of operating systems, including and screen access applications. Using the Bluetooth module, you can also control other devices, for example, a mobile phone.

This is a special pen device that stabilizes cutlery. It is intended for the normal nutrition process of people with Parkinson’s disease. You can attach a nozzle – a fork or a spoon to such a handle to reduce their jitter by 70% and eliminate the risk of spills. The starter kit contains a charger, the holder and a nozzle-spoon, you can also order a carrying case. The dishes from the set are washed in the usual way.

A distinctive feature of this prosthesis is an organic combination of functionality and aesthetics. The design of the Stradivary prosthesis allows it to be modified to perform various work operations, which is ensured by replacing the fingers with separate working tools, the ability to embed wireless Internet access devices and displaying information on a display mounted in the forearm area. In addition, depending on the preferences of the user, they can change the shape, size and color of the prosthesis.

Dexteria is a whole series of useful applications from the developer of Binary Labs. Programs are designed to develop children’s motor skills and restore motor function in people after a stroke.

Downloading applications on any platform, you can at first take them for ordinary fun games. But in fact, a series of exercises are offered to train the upper limbs and develop dexterity, strength and control. Each registered user can also track his or her personal progress.